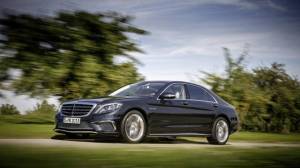 Even before it was officially brought under the Mercedes-Benz umbrella, AMG has been making big Benzes faster since the late 1960s. The 1987 AMG Hammer recalibrated the notion of what a performance luxury car should be. To this day, no one does brutal luxury like AMG, and the new 630 hp S65 AMG is ample proof of that.

The engine warlocks at AMG have thrown just about every trick they know at the new S65’s 6.0 liter Biturbo V12. Remember, these are the same guys that build engines for Pagani. They’ve bolted up twin turbochargers, an aluminum crankcase, a forged alloy crankshaft, an air-to-water intercooler, and stop/start functionality. Though, in the case of that last one, it should be noted that any concessions towards fuel conservation in a motor like this is relative.

This is also the first S65 to be fitted with AMG’s seven-speed Speedshift Plus 7G-Tronic transmission. Previous versions were only available with the old five-speed auto box, due to concerns that, at the time, the seven-speed transmission wouldn’t be able to cope with the Biturbo V12’s electronically limited 736 lb-ft of torque.

The standard AMG sport suspension utilizes a camera that scans the road ahead and is able to recognize undulations to allow for suspension adjustments in advance. Carbon ceramic disk brakes with 420 mm rotors can be fitted on the front axle as an option. Considering the head of steam this car is capable of producing, these might not be a bad idea.

Outside, the S65 distinguishes itself from the S63 with chrome accents on the front fascia and unique high-gloss polish 20-inch wheels with three other wheel sets available as optional. The interior is fitted with every toy in the Mercedes-Benz catalog. Nappa leather, animated instrument cluster, head-up display, hand rest integrated touchpad and much more are all included.

The S65 AMG will make simultaneous official debuts at the Tokyo and Los Angeles auto shows.